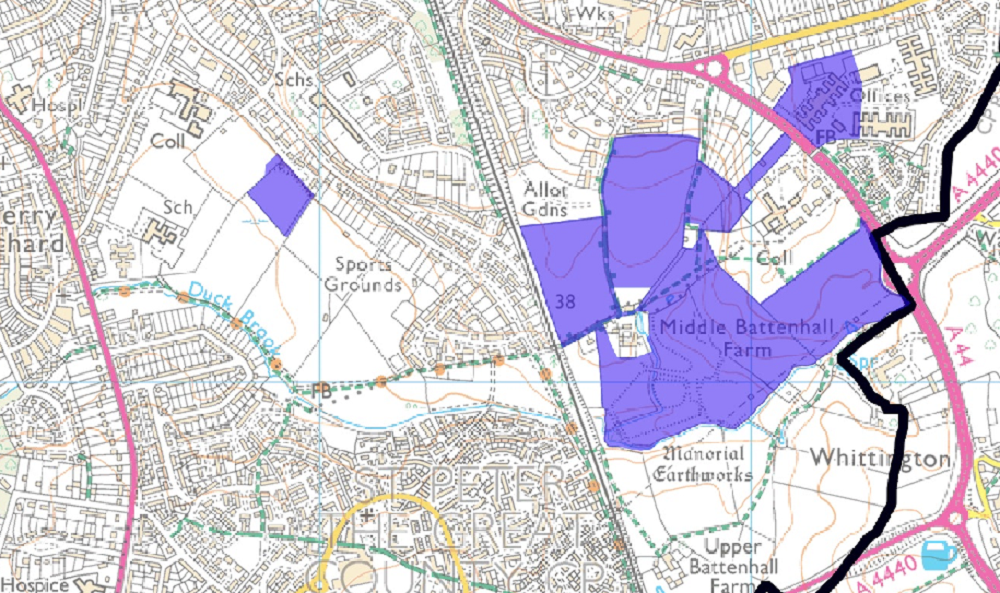 The prospect of development of green space in Battenhall has caused dismay among residents, who are being urged to be “vocal and vociferous” in their opposition during a consultation period running until next month.

Several sites have been put forward for potential development as part of the South Worcestershire Development Plan (SWDP), prepared jointly by Worcester City and Wychavon and Malvern Hills district councils.

The plan allocates larger “strategic” sites across Worcestershire and assesses other potential development sites for uses including housing, employment or community use.

A call for sites was put out to landowners and developers and with sites now submitted, the   SWDP’s Issues and Options consultation, launched last Monday, will run until Monday, December 17.

Among the sites put forward are Middle Battenhall Farm and an area of the Battenhall Road playing fields on Evendine Close.

Similar applications submitted five years ago were dropped following  a storm of protest from local residents but the latest one for the Middle Battenhall Farm site is twice the size of the previous one.

People will have the chance to view the proposals at an event at Worcester’s Crowngate Shopping Centre tomorrow (Saturday, November 10) and a meeting of the Friends of Battenhall group to discuss the issue takes place at the city’s Guildhall on Monday (November 12).

Among the people leading objections to the proposals is Battenhall’s Green city councillor, Louise Griffiths.

She has sent letters to residents highlighting her concerns.

In the letters she says: “Those of you who have lived in the area for a number of years will, no doubt, remember the public outcry last time Middle Battenhall Farm was put forward and I am hoping that the reaction will be just as strong this time.

“The new scheme includes much more land than that proposed several years ago and has scope for several hundred new homes across what is currently farmland and which contains several ancient Scheduled Monuments on the Historic England register.”

She adds: “Recent efforts by the Friends of Battenhall residents’ group, the Middle Battenhall Farm Land Action Group and St Peter’s Parish Council to get Middle Battenhall farm designated an Asset of Community Value have been rejected by the city council.

“This has now left us with no choice but to be vocal and vociferous in our opposition  to any development on this land.”

Cllr Griffiths added she understood that homes needed to be built but said they “should not come at the expense of local green space and should certainly not be happening when we have neither the local infrastructure nor the amenities to support large numbers of new homes and the families that will be occupying them.”

She urged residents to visit the open consultation at Crowngate tomorrow, between 10am and 4.30pm and the Friends of Battenhall meeting at the Guildhall on Monday, beginning at 7.30pm, to make their feelings known.