A parish council chairman has recalled how he narrowly escaped death as a young naval serviceman during the Falklands War.

This year marks the 40th anniversary of the conflict between Britain and Argentina over the sovereignty of the islands.

The ship that Kevin Fincher, who chairs Norton-juxta-Kempsey Parish Council, was a crewman on was hit by a bomb which passed straight through the vessel but did not explode on May 12, 1982.

He acknowledges he is “lucky to be alive today”, four decades on from the fighting.

Mr Fincher eventually rose to the rank of Commander before leaving the Royal Navy in 2018.

He joined the Royal Navy in 1980 “to see the world”, joining his first ship, HMS Dido after qualifying as a Seaman (Radar Operator).

In 1982 his vessel was in Gibraltar with 16 other warships, about to take part in an exercise.

He explained: “Overnight on April 1, there was a buzz in the ship, and as April 2 dawned, I was summoned to the Master at Arms office and told to pack my kit.

“I was being transferred to HMS Glasgow, a Type 42 Anti-air warfare Destroyer.”

The ship travelled 8,000 miles to the Total Exclusion Zone established round the Falkland Islands, remaining there with two other T42s, Sheffield and Coventry, protecting the rest of the Task Force.

The Sheffield was hit by an Exocet missile on May 4, with 20 of the crew killed and 26 injured.

The ship sank under tow six days later and is now a war grave.

The Glasgow had been paired with HMS Brilliant to go inshore and conduct Naval Gunfire Support (NGS).

HMS Coventry had been paired with HMS Broadsword and the ships alternated to provide 24-hour bombardment.

Mr Fincher said: “On May 12 at 11am we were on the gunline with HMS Brilliant.

“Four Argentinian A4 Skyhawks came in fast and low. 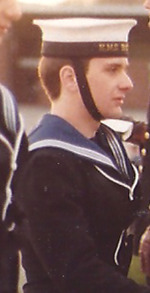 “Brilliant shot down two with Seawolf missiles, a third ran into the debris of the first two and the fourth dropped a 1,000lb bomb that hit the water and bounced over Glasgow.

“A second wave of three A4s arrived and Brilliant’s Seawolf system failed. It came down to close range weapons.

“One bomb exploded ahead of Glasgow, one bomb astern, the third went straight through the ship and out the other side without exploding.

“We lost power and were reduced to 10 knots.”

He added: “Lt Fausto Gavazzi was shot down immediately after his successful attack on HMS Glasgow by his own forces at Goose Green.

“He was posthumously promoted for his bravery.”

On May 25 HMS Coventry was hit by a 1,000lb bomb in exactly the same location but, this time, the bomb exploded.

Following its astonishing escape from a similar fate and following emergency repairs, HMS Glasgow was ordered back to the UK for repair, arriving back on June 20 to a rapturous welcome.

Mr Fincher went on to marry and has two sons.

Apart from chairing the parish council he is a trustee of a local charity and his interests include fine wine, rugby and military history. 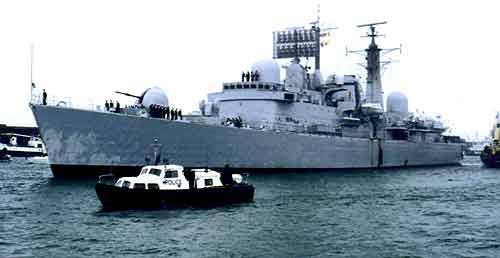 HMS Glasgow returning to the UK following action in the Falklands, above

A defibrillator has been installed on the outside wall of St Peter’s Village Hall. .. Read More

Vehicles running along the Southern Link Road skirting St Peter’s are not necessarily speeding despite being noisy residents have been told... Read More

A Spetchley teenager is set to scale mountains in an SAS-style challenge to raise funds for a hospital charity fund. .. Read More

SWorcesterVoice If you speak #ukrainian or #russian and would be willing to help translate for #ukranianrefugees arriving in… https://t.co/7KCx23koWD
2 months, 2 weeks ago

SWorcesterVoice The #pact meeting scheduled for #stpetersbaptistchurchworcester on Tuesday, January 4 has been postponed. See… https://t.co/uVfjq5ovUK
5 months, 3 weeks ago