Proposals which could see a country park established while enabling housing development to take place in Battenhall are being put forward jointly by campaigners and land owners.

The plans, if eventually given the go-ahead, would also involve some development on land near Whittington Hall, opposite Swinesherd Way.

For years, residents near Middle Battenhall Farm have feared housing could be developed on the site, impacting on their neighbourhood, with loss of amenity and increased traffic.

Development of the farmland has been opposed in recent years by the Middle Battenhall Farm Land Action Group (MBFLAG), which has previously fended off the threat.

The encroachment of the South Worcestershire Development Plan (SWDP), however, has prompted a rethink, with group members entering discussions with land owners keen on development.

A statement issued by the group explained it had “typically always been on the back foot” having to respond to events and remaining vigilant in looking out for developer proposals.

The statement went on: “Through the latter quarter of 2020, MBFLAG has been trying to get more on the front foot, discussing our long-term aims of protecting the MBF [Middle Battenhall Farm] site for community benefit directly with the landowners.

“Of course, we know that the present landowners would prefer to develop the land, therefore potentially these two aims are polar opposite and difficult to ever reconcile.

“However, through these landowner discussions and significant compromises on both sides, we are delighted to have been able to potentially secure a long-term future for MBF which permanently resolves the position for the benefit of the community, provides a wildlife habitat and serves as a suitable setting for the listed buildings and scheduled monuments.

“This preservation, however, must, unfortunately, involve some compromise in order to satisfy all parties and their motives.

“It is this wider, larger site that allows better potential for all parties’ aspirations to be met and provides an opportunity to designate areas for different uses.”

The statement added: “Through consultation discussions between MBFLAG committee members and a representative for the landowners, each party has had a good opportunity to express their desires for the site.

“These range from conservation, preservation, public access etcetera through to development and infrastructure.

“Through these discussions MBFLAG were invited to draw up a proposal which effectively serves as a local Neighbourhood Plan that facilitates the preservation of the MBF setting into a wider masterplan which incorporates areas of development.”

The statement explained: “The timing of this MBF Masterplan drafting also coincides with the SWDP’s recent call for sites for a new country park and also for housing – we believe MBF/UBF can provide a solution which satisfies all parties and also responds to the needs of the SWDP for housing and a country park.”

If the proposal for the 77-acre country park at Middle Battenhall Farm is to succeed, neighbouring housing develop-ment has to be permitted.

Under the proposed scheme land to the south of the site, towards Upper Battenhall Farm, would be dedicated to facilitate that, as well as land to the east, including ancillary development next to New College Worcester and Whittington Hall.

The country park proposal has been centred on the creation of a new, meandering walking loop. 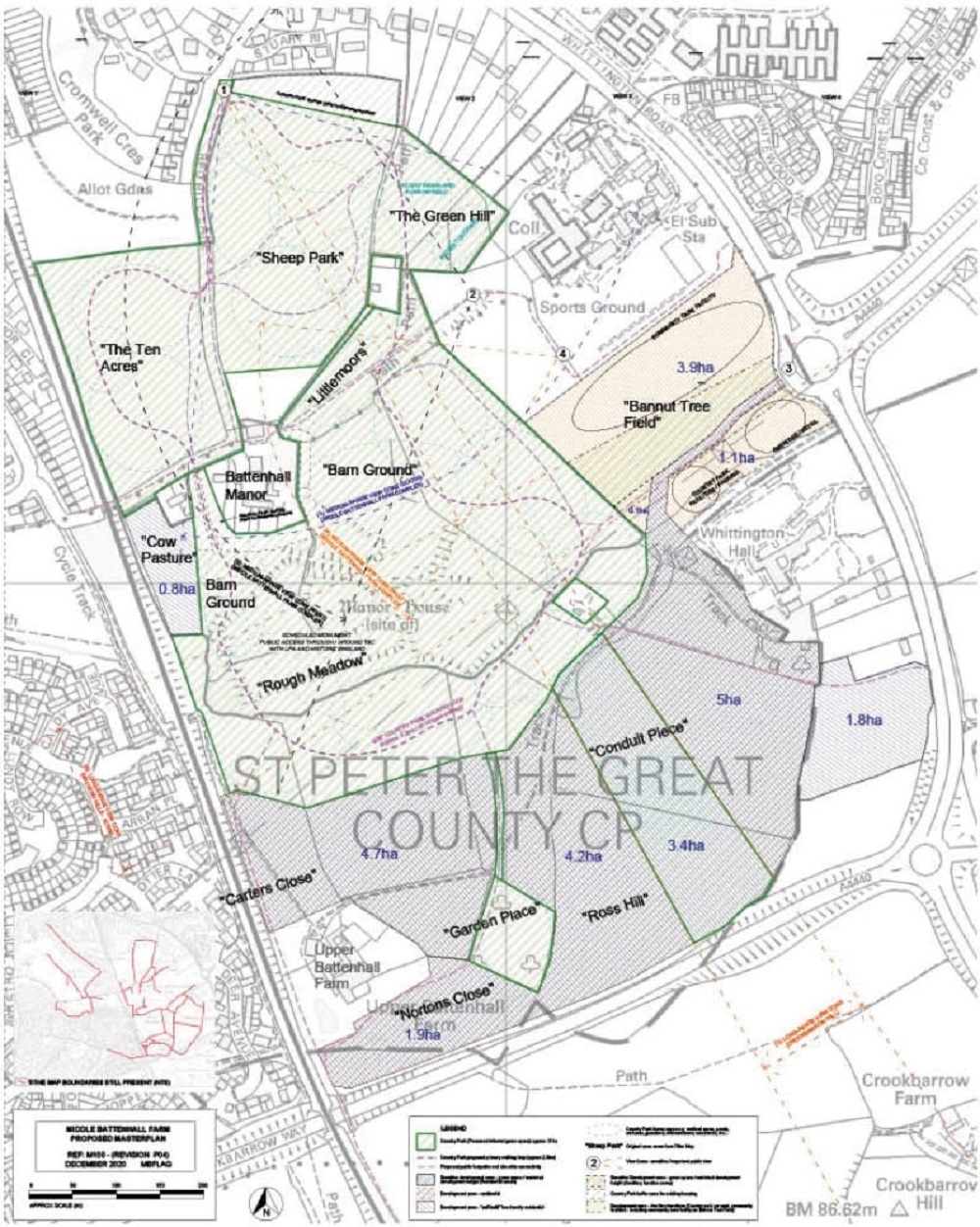 In its proposals statement the group said: “To allow the site to practically operate as a country park, accessibility, connectivity, function and purpose are critical and need to be meaningfully defined so that it works.

“In addition, the developer’s desire to provide residential dwellings to meet the ever-increasing demands of the SWDP needs to be allocated and a way for the two functions to coexist needed to be found.”

The envisaged walking loop would “typically take around 30 minutes to walk around”, according to the statement but would also provide for shorter routes.

There would be several entry and access points and further connections to existing cycle routes and public rights of way.

The statement went on: “The location of the country park means that it is within easy walking distance for many people from nearby residential areas.

“The proposal for the MBF country park is not for this to be another formal grass space nor children’s play parks – these can be found nearby in St Peter’s –but instead to be informal green space to build upon the existing character of the site.”

What do you think about the plans? Let us know your views at southworcestervoice@gmail.com