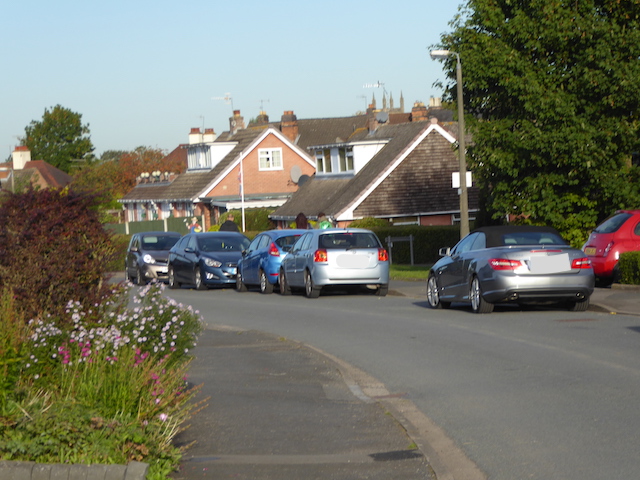 Every picture tells the same story for a Battenhall mum who is campaigning to make drivers think twice about making dangerous manoeuvres or parking illegally or inconsiderately near a school.

Kerry Ward, whose children have almost been hit on two separate occasions by drivers reversing in Midhurst Close and Arundel Drive, has been taking photos of drivers parked where they should not be or have parked awkwardly in those roads, to be forwarded to the police.

Her sons attend Red Hill CofE Primary School and she said the problems around drop-off and pick-up times on the school run have escalated again after seeming to have improved following similar issues 18 months ago.

She explained: “It’s always annoyed me that people park in

“About 18 months ago I was walking with the boys down Midhurst Close when a parent decided she needed to turn her car around and mount the kerb.

Things improved after that but another near miss recently has sparked her current campaign, in which she is working with the school, the police and local councillors.

She said that walking to the school, they decided to cross further back up along Arundel Drive, away from Midhurst Close. As they crossed the road, a car reversed, with the driver not looking out properly.

“I just went ‘did you not think it was sensible to look before you reversed’?, said Mrs Ward.

“I had to go into school to have a cup of tea, I was that shaken up by the whole incident.”

Dropped kerbs with tactile slabs were installed in Arundel Drive and Midhurst Close during the summer but Mrs Ward said people parked across and on them, flouting the law.

“A lot of people don’t realise it’s illegal to park in front of a dropped kerb or they don’t care,” she said.

She stressed that most parents were careful about how and where they parked but: “We have a small minority of parents that park across dropped kerbs and park in Midhurst Close.”

She added: “We’re all human and our children do escape from us occasionally.

“They run out of that gate into the road and you have got people that are parking there.

“I have kind of taken the lead on it as a parent.

“I have had two near misses. There have been a number of near misses with other children.

“I don’t want someone to end up under the wheels of a car.”

She went on:  “I just want people to be more considerate. To me, this is only about raising awareness of the safety of the children and encouraging people to park sensibly.”