Third walking and cycling bridge lowered into place across the A4440

A new walking and cycling bridge is now in place over a section of Worcester’s Southern Link Road.

The bridge, which replaces a pedestrian crossing, passes over Hams Way.

Once complete, it will allow improved crossing of the busy road for pedestrians and cyclists.

The bridge was built off site and carefully manoeuvred into place.

The Hams Way Footbridge was lifted into position in mid September with further works to complete the access ramps and stairs taking place before the bridge can be fully opened later this year.

Conservative councillor Ken Pollock, Cabinet Member with Responsibility for Economy and Infrastructure for Worcestershire County Council, said: “It’s good to see another key part of this scheme being put into place.

“It’s certainly an impressive structure and, when it’s opened, will further enhance walking and cycling routes in and around the city.”

The bridge is one of four new crossings to be installed as part of the scheme to dual the A4440 Southern Link Road from the M5 to the Powick roundabout. 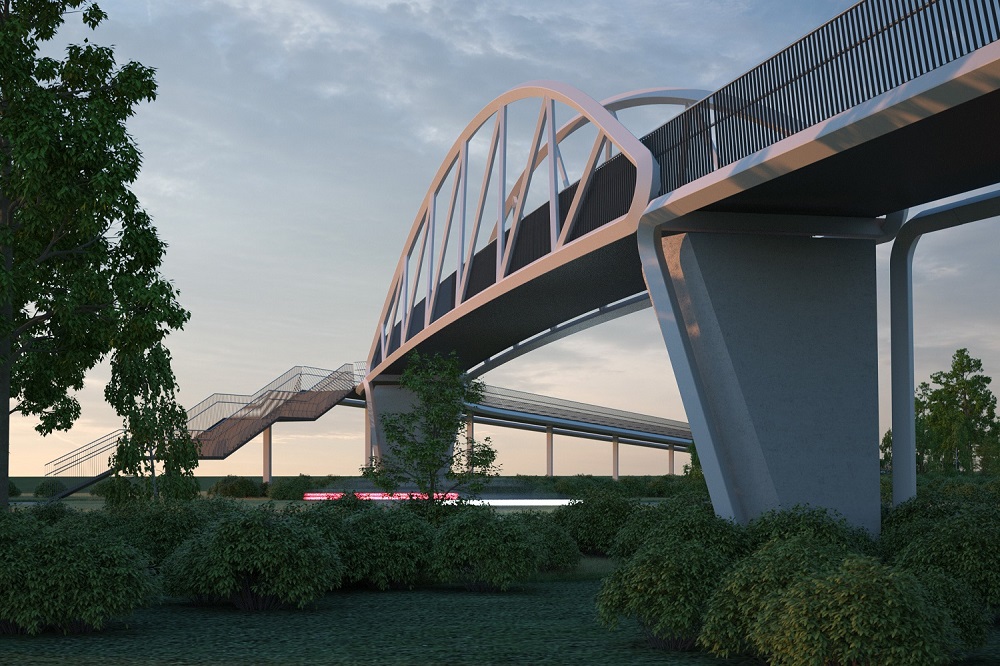 Work is underway on site to prepare for the installation of the main span of the Broomhall Way Footbridge, with the installation set to take place later this year. Works on the bridge, alongside additional works, which include upgrading of the footpaths and cycle ways, measures to lessen the impact of flooding on the park, a planting scheme and an improved football pitch for the park, are scheduled for completion in the first half of 2021.

Work has also started on the underpass near the Ketch roundabout. Currently the completion of the work is planned for the second half of 2021.

A huge iron girder has been lifted into place for the dualling of Worcester's Carrington Bridge over the River Severn. Watch the girder being moved... Read More

SWorcesterVoice The new #hamswayworcester footbridge is due to be lifted into position over the #A4440 #southernlinkroad. See… https://t.co/g4knXA8022
1 month, 2 weeks ago

SWorcesterVoice A clear-up operation got under way this morning to remove refuse from #grasshopperpark in #stpetersworcester follow… https://t.co/eb5LQS5tYh
1 month, 3 weeks ago

SWorcesterVoice #travellers who had camped on #grasshopperpark in #stpetersworcester have left the site after spending five days th… https://t.co/r9HppsFKbO
1 month, 3 weeks ago

SWorcesterVoice The ramps for #crookbarrowwayfootbridge at #stpetersworcester are being closed for work to be completed. See… https://t.co/GPdGUVXi2K
2 months, 3 weeks ago