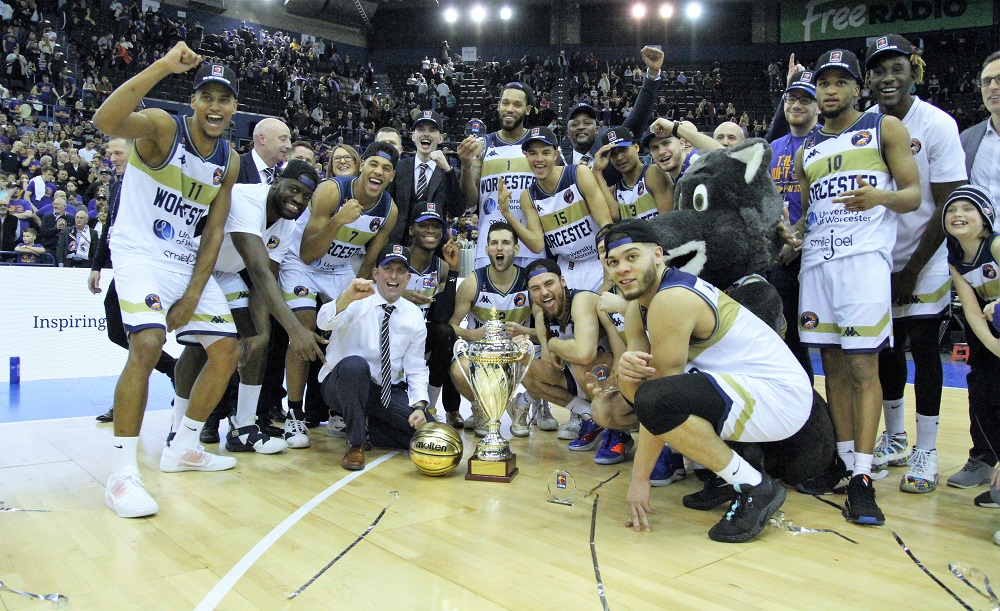 Worcester Wolves have secured British basketball’s first silverware of the season by lifting the BBL Cup after a pulsating 67-59 victory over Bristol Flyers at a packed Arena Birmingham.

A huge turnout of Worcester fans were among a record 9,244 spectators entertained by a match that Wolves led from start to finish but which remained undecided until the final moments.

Worcester accumulated a 41-27 lead early in the second half only to see Bristol keep the pot boiling by closing the advantage to just 63-59 with half a minute remaining in the contest.

Coach Matt Newby expressed his delight at his side’s success, saying: “Our players deserve massive credit for how hard they prepared for the final. They followed the scouting report, adhered to the game plan and we kept Bristol’s key players in check.

“Winning … means such a lot for the club, for all our fans and for me personally.

“Management have been outstanding in their support. A sports franchise is never easy to manage. Mick Donovan has produced a programme from scratch and has given me the opportunity to come to Worcester.

“For fans, I know it’s been a rough ride for a few years. It’s important that they are rewarded for supporting us through thick and thin. There’s a great family orientation here, with a genuine affectation for me and the players.

“For me personally, I’ve had highs and lows in basketball so being a part of this success in Worcester means a great deal to me and my family.”

Centre Amir Williams signalled his return from injury by grabbing the game’s first rebound and its opening score.

Mark Hughes dribbled from side-to-side for Wolves’ next basket and took an offensive charge to steal Flyers’ possession.

A strong drive and a long three-pointer from Hughes tightened Worcester’s control.

Julius Van Sauers froze Bristol defenders with an artful shimmy and Maarten Bouwknecht caused further torment with a pinpoint pass to a wide-open Williams, finalising a 34-25 cushion going into half-time.

Williams bookended the interval scoring with, on this occasion, Cortez Edwards supplying the assist. With Worcester’s man in the middle proving irrepressible on offense and joining team-mates in remaining stout in defence, Flyers were denied chances to build a consistent response.

Just Bristol’s third triple of the afternoon from 14 attempts kept them in contention trailing 52-46 early in the last quarter.

Williams signed off his statistical assault with a couple of blocked shots and a two-handed slam dunk before his namesake Jordan Williams debuted on the scoresheet with a double of turnaround hooks in less than a minute.

As the final buzzer approached Flyers pulled within sight of finally overturning the lead before clever clock control settled matters and allowed the Worcester celebrations to begin.

Amir Williams was honoured as the final’s Most Valuable Player after his outstanding 23 points, 13 rebounds and five block performance. Hughes and Edwards supplied 12 and 11 points respectively, with Kofi Josephs posting nine.

“The credit for the MVP award goes to my team-mates. I owe it all to them,” said Williams. “They put me in great positions to score and defensively I was able to block shots and clean up the glass.

“This is what I do, it’s my career. I love the support we get from all the Worcester fans and I’ll continue to play as hard as I can, with or without an injury.”

Fans will be able to applaud the team’s cup triumph when Wolves return to the city this Friday, January 31 at 7.30pm to host Newcastle Eagles in league action at the University of Worcester Arena.

“Friday will be another big game for us,” said Newby. “Hopefully we’ll keep the energy going. Winning the cup can be the catalyst and motivation for more success.”