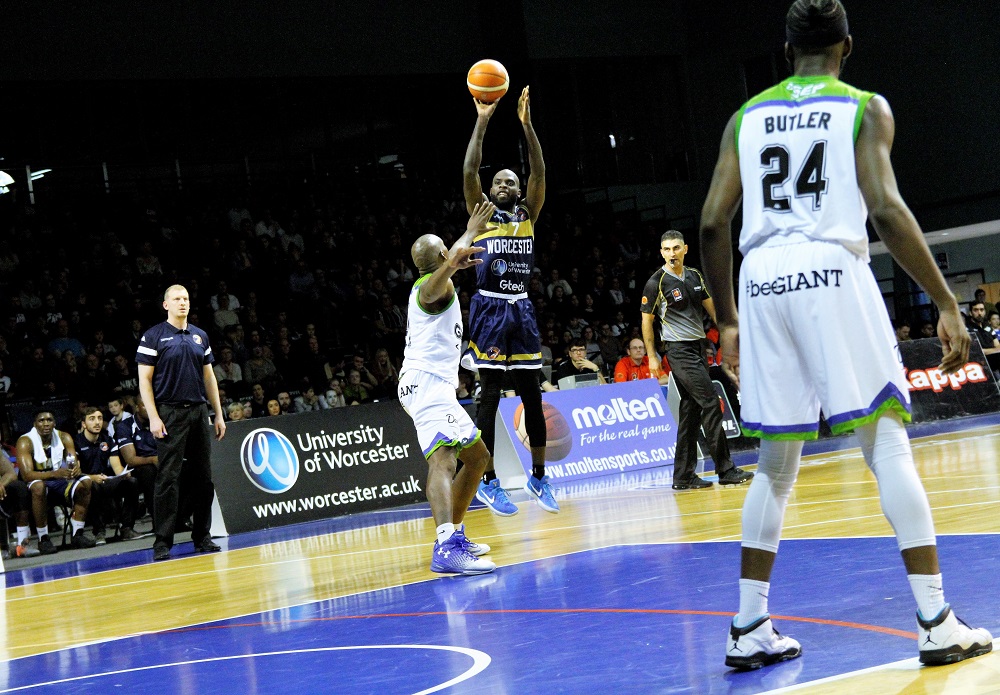 Worcester Wolves’ Director of Basketball Ty Shaw bemoaned his side’s lack of rebounding as the cause of his team’s difficult start to the season.

Wolves suffered their fourth defeat in five matches when going down 86-92 to Manchester Giants at the University of Worcester Arena.

A back-and-forth encounter was there for the taking but Worcester’s inability to grab hold of their opponents’ misses gifted repeated second-chance points and set up a demoralising loss.

“Giving up 15 offensive rebounds in the second half – that’s the entire game there. There’s nothing else to it,” stated Shaw bluntly.

“It’s about the desire to be physical enough to put your body on the line, to hit somebody and go and get the basketball.”

It was a couple of former Manchester men, Dean Wanliss and Jordan Whelan, who opened Worcester’s scoring. Darell Combs was introduced to the court after three minutes and immediately impressed.

Five quick points became eight when he took advantage of a crowd-pleasing behind-the-back dribble and assist from Miki Servera. Two more scores from Combs kept Wolves on the tail of their visitors at 24-27 as the first quarter closed.

Debuting British forward Terrel Martin-Garcia converted a Combs hand-off for his opening points in a Wolves’ vest, keeping the scores tight at 47-49 by the half-time interval.

Worcester managed to edge ahead as the third period wound down once Giants’ dangerous centre Willie Clayton was forced to the bench after picking up his fourth foul and venting his displeasure on an advertising hoarding.

The hosts’ chances got a further boost when another Manchester stalwart Ingus Bankevics also committed his fourth infraction and was then sent to the locker rooms for disputing the referee’s decision.

But a 68-62 lead would not be a sufficient cushion for Wolves. Successive baskets secured from offensive rebounds put Giants 77-74 ahead with five minutes left in the match.

A double of scores for Martin-Garcia kept his side in contention trailing 84-86 in the final two minutes before the Giants once more took control of the boards to pull away to a 92-86 success.

Combs dominated the scoring with 29 points. Servera and Martin-Garcia contributed 15 and 11 points respectively, while Robert Crawford chipped in with 13.

Wolves are quickly back in action tomorrow, travelling to Surrey Scorchers, a side with just one league win to their name this season but now boosted by lifting silverware at last weekend’s British Basketball All-Stars Championship.

“The biggest thing for us right now is offensive rebounding,” added Shaw. “If we don’t clean up the glass, if we don’t do our job on the offensive glass then we’ll keep putting ourselves in positions where it’s a close game but where we’re not quite getting over the hump.”

The game starts at 2pm.